Chieftains of the Dúnedain 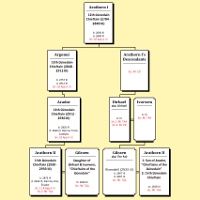 Family Tree of the Chieftains of the Dúnedain.
In the North is the Kingdom of Arnor ruled by the descendants of Isildur....

The Letters of J. R. R. Tolkien, Edited by Humphrey Carpenter, Letter 131 to Milton Waldman, circa 1951

[In] the north Arnor dwindles, is broken into petty princedoms, and finally vanishes. The remnant of the Númenóreans becomes a hidden wandering Folk, and though their true line of Kings of Isildur's heirs never fails, this is only known in the House of Elrond.

The Letters of J. R. R. Tolkien, Edited by Humphrey Carpenter, Letter 131 to Milton Waldman, circa 1951

In one of his letters, Tolkien describes the role of a reigning king (or chieftain) of the Númenórean line, in contrast to that of a steward, such as the one that likely ruled the Dúnedain of the North before Aragorn II came of age, and during his later wanderings:

A Númenórean King was monarch, with the power of unquestioned decision in debate; but he governed the realm with the frame of ancient law, of which he was administrator (and interpreter) but not the maker. In all debatable matters of importance domestic, or external, however, even Denethor [Steward of Gondor] had a Council, and at least listened to what the Lords of the Fiefs and the Captains of the Forces had to say. Aragorn re-established the Great Council of Gondor, and in that Faramir, who remained by inheritance the Steward (or representative of the King during his absence abroad, or sickness, or between his death and the accession of his heir) would [be] the chief counsellor.

The Letters of J. R. R. Tolkien, Edited by Humphrey Carpenter, Letter 244 to a reader of The Lord of the Rings, circa 1963


The Northern Line: Heirs of Isildur

The Lord of the Rings, Appendix A, Annals of the Kings and Rulers: The Realms in Exile


† The sign † indicates a premature death, in battle or otherwise, though an annal of the event is not always included.

The Lord of the Rings, Appendix A, Annals of the Kings and Rulers