A yellow or white star-shaped flower found in Tol Eressëa and Lothlórien.

Thus the Eldar graced the wedding of Erendis.... Their ship was laden with flowers for the adornment of the feast, so that all that sat there, when evening was come, were crowned with elanor and sweet lissuin....

At the feet of the trees,... the grass was studded with small golden flowers shaped like stars....

'Behold! You are come to Cerin Amroth.... Here ever bloom the winter flowers in the unfading grass: the yellow elanor, and the pale niphredil.'

At the hill's foot Frodo found Aragorn, standing still and silent...; but in his hand was a small golden bloom of elanor.... He was wrapped in some fair memory....

Before them lay a long lawn of shining grass, studded with golden elanor that glinted in the sun.

The Fellowship of the Ring, LoTR Book 2, Ch 8, Farewell to Lórien

O Lórien! Too long I have dwelt upon this Hither Shore
And in a fading crown have twined the golden elanor.
But if of ships I now should sing, what ship would come to me,
What ship would bear me ever back across so wide a Sea?

'But if it's to be a flower-name, then... it must be a beautiful flower, because, you see, I think she is very beautiful....'

Frodo thought for a moment. 'Well, Sam, what about elanor, the sun-star, you remember the little golden flower in the grass of Lothlórien?'

When he had gone and passed again into the outer world, still Frodo the wanderer from the Shire would walk there, upon the grass among elanor and niphredil in fair Lothlórien.

'There at last when the mallorn-leaves were falling, but spring had not yet come, [Arwen] laid herself to rest upon Cerin Amroth; and there is her green grave, until the world is changed..., and elanor and niphredil bloom no more east of the Sea.'

The Lord of the Rings, Appendix A, Annals of the Kings and Rulers: Here Follows a Part of The Tale of Aragorn and Arwen 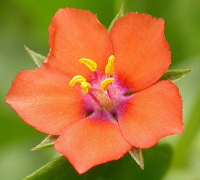 Scarlet pimpernel, Anagallis arvensis: Tolkien said elanor was like these flowers, but yellow and white in color.
I have greatly enjoyed the Cape Flower Book. 1 Quite fascinating in itself and in its general botanical and indeed paleo-implications. I have not seen anything that immediately recalls niphredil or elanor or alfirin; but that I think is because those imagined flowers are lit by a light that would not be seen ever in a growing plant and cannot be recaptured by paint. Lit by that light,... elanor [would be] a pimpernel 2 (perhaps a little enlarged) growing sun-golden flowers and star-silver ones on the same plant, and sometimes the two combined.


êl, elen 'star'. According to Elvish legend, ele was a primitive exclamation 'behold!' made by the Elves when they first saw the stars. From this origin derived the ancient words êl and elen, meaning 'star', and the adjectives elda and elena, meaning 'of the stars'. These elements appear in a great many names.... The Sindarin equivalent of Elda was Edhel (plural Edhil), q.v.; but the strictly corresponding form was Eledh, which occurs in Eledhwen....

nár 'fire' in Narsil, Narya; present also in the original forms of Aegnor (Aikanáro 'Sharp Flame' or 'Fell Fire') and Fëanor (Feanáro 'Spirit of Fire'). The Sindarin form was naur, as in Sammath Naur, the Chambers of Fire in Orodruin. Derived from the same ancient root (a)nar was the name of the Sun, Quenya Anar (also in Anárion), Sindarin Anor (cf. Minas Anor, Anórien). 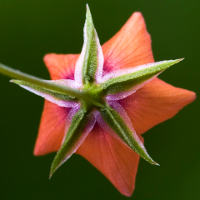 The back of a scarlet pimpernel, Anagallis arvensis, showing its remarkable star-shaped symmetry.
Anagallis is a genus of about 20–25 species of flowering plants in the myrsine family Myrsinaceae, commonly called pimpernel and perhaps best known for the Scarlet pimpernel referred to in literature.

These are annual or perennial plants, growing in tufts on weedy and uncultivated areas.... The flowers of the different species show miscellaneous colors. They are radially symmetrical with five petals. They grow usually in the leaf axils, but sometimes as short spikes at the top of the stem. Pimpernel flowers remain open only under direct sun-light.