Other Names:
nifredil (HoME only)

A small white flower found in Doriath and Lothlórien:

[In] Beleriand... the bright stars shone as silver fires; and there in the forest of Neldoreth Lúthien was born, and the white flowers of niphredil came forth to greet her as stars from the earth.

At the feet of the trees,... the grass was studded with small golden flowers.... Among them, nodding on slender stalks, were other flowers, white and palest green: they glimmered as a mist amid the rich hue of the grass....

'Behold! You are come to Cerin Amroth.... Here ever bloom the winter flowers in the unfading grass: the yellow elanor, and the pale niphredil.'

When he had gone and passed again into the outer world, still Frodo the wanderer from the Shire would walk there, upon the grass among elanor and niphredil in fair Lothlórien.

'There at last when the mallorn-leaves were falling, but spring had not yet come, [Arwen] laid herself to rest upon Cerin Amroth; and there is her green grave, until the world is changed..., and elanor and niphredil bloom no more east of the Sea.'

The Lord of the Rings, Appendix A, Annals of the Kings and Rulers: Here Follows a Part of The Tale of Aragorn and Arwen 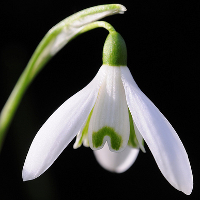 A snowdrop, Galanthus nivalis: Tolkien likened it to niphredil.
I have greatly enjoyed the Cape Flower Book. 1 Quite fascinating in itself and in its general botanical and indeed paleo-implications. I have not seen anything that immediately recalls niphredil or elanor or alfirin; but that I think is because those imagined flowers are lit by a light that would not be seen ever in a growing plant and cannot be recaptured by paint. Lit by that light, niphredil would be simply a delicate kin of a snowdrop 2....

Tolkien was evidently quite pleased with his invented flower names, as indicated in this letter to his son, Christopher:

Are you still inventing names for the nameless flowers you meet? If so, remember that the old names are not always descriptive, but often mysterious! My best inventions (in elvish of the Gnomish dialect) were elanor and nifredil; 3 though I like A[nglo]-S[axon] simbelmynë or evermind.... I think I shall have to invent some more for Sam's garden at the end.

Snowdrops, Galanthus nivalis, like the niphredil blooming in Neldoreth and Lothlórien.
The common snowdrop (Galanthus nivalis) is the best-known representative of a small genus of about 20 species in the family Amaryllidaceae that are among the first bulbs to bloom in spring....

All species of Galanthus have... erect flowering stalks, destitute of leaves but bearing at the top a solitary pendulous bell-shaped flower. Galanthus nivalis grows 15 cm tall.... The white flower has six petals, the outer three segments being larger and more convex than the inner series.

3 This text is from one of Tolkien's early letters; the name is an earlier version of the proper name as published in The Silmarillion.