Other Names
the mazes of the Queen
the enchantment of Doriath

Location: A wall of enchantment encircling Doriath, created by Melian the Maia to ward off intruders. 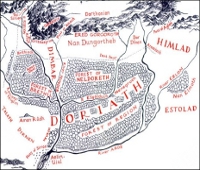 Doriath, showing Neldoreth, Region, Nivrim, and Aelin-uial; all lie within the Girdle of Melian.
[Thingol] withdrew all his people that his summons could reach within the fastness of Neldoreth and Region, and Melian put forth her power 1 and fenced all that dominion round about with an unseen wall of shadow and bewilderment: the Girdle of Melian, that none thereafter could pass against her will or the will of King Thingol, unless one should come with a power greater than that of Melian the Maia. And this inner land, which was long named Eglador, was after called Doriath, the guarded kingdom, Land of the Girdle.

[All] Doriath lay east of Sirion save for a narrow region of woodland between the meeting of Teiglin and Sirion and the Meres of Twilight. By the people of Doriath this wood was called Nivrim, the West March; great oak-trees grew there, and it also was encompassed within the Girdle of Melian, that so some portion of Sirion which she loved in reverence of Ulmo should be wholly under the power of Thingol.

In the south-west of Doriath, where Aros flowed into Sirion, lay great pools and marshes on either side of the river, which halted there in his course and strayed in many channels. That region was named Aelin-uial, the Twilight Meres, for they were wrapped in mists, and the enchantment of Doriath lay over them.

[In] the Twilit Meres... amid creeks and reeds ferries were kept hidden and guarded on the east shore.... Now they... passed over in the white mists before the dawn. And even as the sun rose red..., the guards went up onto the west shore, and left the Girdle of Melian.

The Children of Húrin, Ch 14, The Journey of Morwen and Niënor to Nargothrond

[By] the Girdle of Melian was Doriath defended through long ages from the evils without.

Thingol would suffer none of the Noldor to pass the Girdle, save his kinsfolk of the house of Finarfin, and least of all those that were friends of the sons of Fëanor.

[At] last, weary and haggard, [Túrin and his guides] reached the confines of Doriath. But there they became bewildered, and were enmeshed in the mazes of the Queen, and wandered lost amid the pathless trees, until all their food was spent. There they came near to death, for winter came cold from the North; but... Beleg the Strongbow... heard their cries and came to them....

The Children of Húrin, Ch 4, The Departure of Túrin

[With Thingol's] death a change came also upon Melian.... [Her] power was withdrawn... from the forests of Neldoreth and Region, and Esgalduin the enchanted river spoke with a different voice, and Doriath lay open to its enemies.


1 For Melian was of the divine race of the Valar, and she was a Maia of great power and wisdom; but for love of Elwë Singollo she took upon herself the form of the Elder Children of Ilúvatar, and in that union she became bound by the chain and trammels of the flesh of Arda. In that form... she gained a power over the substance of Arda....