Location: A seaport on the Bay of Balar at the Mouths of the River Sirion, settled in the First Age by Elven refugees from the Ruin of Doriath and the Fall of Gondolin. 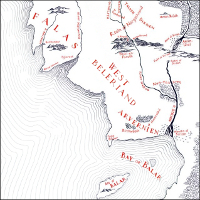 West Beleriand, showing the Mouths of Sirion, where the Havens are located.
[By] Sirion and the sea there grew up an Elven-folk, the gleanings of Doriath and Gondolin....

But... a remnant of the people fled..., and with them was Elwing Dior's daughter, and they escaped, and bearing with them the Silmaril they came in time to the mouths of the River Sirion by the sea.

At Sirion's mouth Elwing daughter of Dior dwelt, and received the survivors of Gondolin.

Thus led by Tuor... the remnant of Gondolin... came at length to Nan-tathren, the Land of Willows.... There... the sea-longing woke in [Tuor's] heart.... Therefore Idril and Tuor... went southwards down the river to the sea; and they dwelt there by the mouths of Sirion, and joined their people to the company of Elwing Dior's daughter, that had fled thither but a little while before.

[From] Balar the mariners of Círdan came among them, and they took to the waves and the building of ships....

These become a seafaring folk, building many boats and living far out on the delta, whither the Orcs dare not come.

Bright Eärendil was then [after Tuor's departure] lord of the people that dwelt nigh to Sirion's mouths; and he took to wife Elwing the fair, and she bore to him Elrond and Elros, who are called the Half-elven. Yet Eärendil could not rest, and his voyages about the shores of the Hither Lands eased not his unquiet.

Now when first the tidings came to Maedhros that Elwing yet lived, and dwelt in possession of the Silmaril by the mouths of Sirion, he... withheld his hand. But in time the knowledge of their oath unfulfilled returned to torment him and his brothers, and... they sent messages to the Havens of friendship and yet of stern demand. Then Elwing and the people of Sirion would not yield the jewel...; and least of all while Eärendil their lord was on the sea, for it seemed to them that in the Silmaril lay the healing and the blessing that had come upon their houses and their ships. And so there came to pass the last and cruellest of the slayings of Elf by Elf....

For the sons of Fëanor that yet lived came down suddenly upon the exiles of Gondolin and the remnant of Doriath, and destroyed them.... Too late the ships of Círdan and Ereinion Gil-galad the High King came hasting to the aid of the Elves of Sirion.... Then such few of that people as did not perish in the assault joined themselves to Gil-galad, and went with him to Balar.