Location: A rugged group of wooded hills just north of the Great East-West Road in the the Angle, between the Mitheithel and Bruinen rivers; part of the ancient kingdom of Rhudaur. 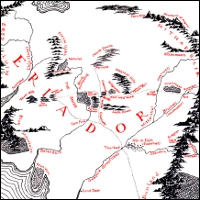 The Peoples of Middle-Earth, HoME Vol 12, Part 1, Ch 7, The Heirs of Elendil: The Ruling Stewards of Gondor: Commentary

[On] the sixth day they reached the top of a long... slope, and saw far ahead a huddle of wooded hills. Away below them they could see the Road sweeping round the feet of the hills....

'The Road runs along the edge of the hills for many miles from the Bridge to the Ford of Bruinen.'

Not far ahead were dreary hills, rising higher and higher, dark with trees. On some of them were old castles with an evil look, as if they had been built by wicked people. 1

A mile [past the Last Bridge] they came to a narrow ravine that led away northwards through the steep lands on the left of the Road... soon they were lost in a sombre country of dark trees winding among the feet of sullen hills....

As they went forward the hills about them steadily rose. Here and there upon heights and ridges they caught glimpses of ancient walls of stone, and the ruins of towers: they had an ominous look. Frodo... recalled Bilbo's account of his journey and the threatening towers on the hills north of the Road, in the country near the Troll's wood....

The hills now began to shut them in. The Road behind held on its way to the River Bruinen, but both were now hidden from view. The travellers came into a long valley; narrow, deeply cloven, dark and silent. Trees with old and twisted roots hung over cliffs, and piled up behind into mounting slopes of pine-wood.

The hobbits... had to pick their way through a pathless country, encumbered by fallen trees and tumbled rocks.... [It] was... difficult to find any way up out of the narrow dales.

'We have come too far to the north,' [Strider] said.... 'If we keep on as we are going we shall get up into the Ettendales far north of Rivendell.'....

The rest of that day they spent scrambling over rocky ground. They found a passage between two hills that led them into a valley running south-east...; but... they found their road again barred by a ridge of high land; its dark edge against the sky was broken into many bare points like teeth of a blunted saw....

They had climbed on to a narrow saddle between two higher points, and the land fell steeply away again, only a short distance ahead.

Night was cold up on the high ridge. They lit a small fire down under the gnarled roots of an old pine, that hung over a shallow pit: it looked as if stone had once been quarried there....

Strider... went to survey the country from the height to the east of the pass.... [He] returned with more comforting news.... If they went on, down the further side of the ridge, they would have the Mountains on their left. Some way ahead Strider had caught a glimpse of the Loudwater again, and he knew that, though it was hidden from view, the Road to the Ford was not far from the River and lay on the side nearest to them.

'We must make for the Road again,' he said. 'We cannot hope to find a path through these hills.'

After a few miles they came out on the top of a high bank above the Road. At this point the Road had left the Hoarwell far behind in its narrow valley, and now clung close to the feet of the hills, rolling and winding eastward among woods and heather-covered slopes towards the Ford and the Mountains.

[Said] Gandalf[,]... 'I met two of Elrond's people.... It was they who told me that three [trolls] had come down from the mountains and settled in the woods not far from the road....'

'Dawn take you all, and be stone to you!' said a voice.... For just at that moment the light came over the hill.... William never spoke for he stood turned to stone as he stooped; and Bert and Tom were stuck like rocks as they looked at him. And there they stand to this day, all alone, unless the birds perch on them; for trolls... must be underground before dawn, or they go back to the stuff of the mountains they are made of....


The Trollshaws are never identified by name in a canon text, but the name and location are shown on the map of Eriador in The Lord of the Rings.

1 In Rhudaur an evil folk, workers of sorcery, subjects of Angmar, slay the remnants of the Dúnedain and build dark forts in the hills.

The Peoples of Middle-Earth, HoME Vol 12, Part 1, Ch 7, The Heirs of Elendil: The Northern Line of Arnor: The Isildurioni