Other Names The Havens

Location: The principal and easternmost of the three harbours — Forlond, Harlond, and Mithlond — built by the Elves on the Gulf of Lhûn in Lindon during the Second Age; the realm of Círdan the Shipwright. 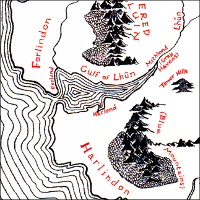 [The] Tower Hills... look [west] towards Mithlond in the Gulf of Lune where the grey ships lie.

The ancient East-West Road ran through the Shire to its [western] end at the Grey Havens....

The Fellowship of the Ring, LoTR Book 1, Ch 2, The Shadow of the Past

Upon the shores of the Gulf of Lhûn the Elves built their havens, and named them Mithlond; and there they held many ships, for the harbourage was good. From the Grey Havens the Eldar ever and anon set sail, fleeing from the darkness of the days of Earth; for by the mercy of the Valar the Firstborn could still follow the Straight Road and return, if they would, to their kindred in Eressëa and Valinor beyond the encircling seas. 1

At the Grey Havens dwelt Círdan the Shipwright, and some say he dwells there still, until the Last Ship sets sail into the West. In the days of the Kings most of the High Elves that still lingered in Middle-earth dwelt with Círdan or in the seaward lands of Lindon.

The Lord of the Rings, Appendix A, Annals of the Kings and Rulers: Eriador, Arnor, and the Heirs of Isildur

[The] Keepers of the Three Rings rode to the Sea, and Master Elrond took there the ship that Círdan had made ready.

And when they had passed from the Shire, going about the south skirts of the White Downs, they came to the Far Downs, and to the Towers, and looked on the distant Sea; and so they rode down at last to Mithlond, to the Grey Havens in the long firth of Lune.

As they came to the gates Círdan the Shipwright came forth to greet them....

Then Círdan led them to the Havens, and there was a white ship lying, and upon the quay... stood a figure... awaiting them....

[The] sails were drawn up, and the wind blew, and slowly the ship slipped away down the long grey firth; and... went out into the High Sea and passed on into the West....


1 The 'immortals' who were permitted to leave Middle-earth... set sail in ships specially made and hallowed for this voyage, and steered due West.... They only set out after sundown; but if any keen-eyed observer from that shore had watched one of these ships he might have seen that it never became hull-down but dwindled only by distance until it vanished in the twilight: it followed the straight road to the true West and not the bent road of the earth's surface.