Location: A large realm built up around the Havens of Umbar; originally built by the Black Númenóreans, it changed hands many times. 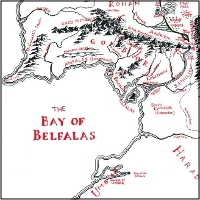 The Bay of Belfalas, showing Umbar and its environs.
The great cape and land-locked firth of Umbar had been Númenórean land since days of old; but it was a stronghold of the King's Men, who were afterwards called the Black Númenóreans, corrupted by Sauron, and who hated above all the followers of Elendil. After the fall of Sauron their race swiftly dwindled or became merged with the Men of Middle-earth, but they inherited without lessening their hatred of Gondor.

The Lord of the Rings, Appendix A, Annals of the Kings and Rulers: Gondor and the Heirs of Anárion, Footnote

... Umbar, where was the mighty haven of the Númenóreans that no hand had wrought.

Umbar... became a great harbour and fortress of the power of Gondor.

In [Hyarmendacil's] day Gondor reached the summit of its power. The realm then extended... south to the River Harnen, and thence along the coast to the peninsula and haven of Umbar.

From The Lord of the Rings, Appendix B, The Tale of Years: The Second Age


933      King Eärnil I takes Umbar, which becomes a fortress of Gondor.
1015    King Ciryandil slain in the siege of Umbar, but Gondor's navy and the strength of the fortress prevent it's being taken.
1050   Hyarmendacil conquers Harad. Umbar is no longer menaced.
1448   The Kin-strife. Castamir having been slain by Eldacar, his sons escape with many followers and ships and seize Umbar.


There they made a refuge for all the enemies of the king, and a lordship independent of his crown. Umbar remained at war with Gondor for many lives of men, a threat to its coastlands and to all traffic on the sea.

1540   King Aldamir slain in war with the Harad and Corsairs of Umbar.
1810   King Telumehtar Umbardacil retakes Umbar and drives out the Corsairs.
1856   After the battles with the Wainriders, Gondor withdraws from all eastern lands except Ithilien. Umbar was again lost.
2758   Fleets from Umbar and Harad attack the coasts of Gondor, with landings as far north as the mouth of the Isen.
2980   Aragorn, as Thorongil, burns the ships of the Corsairs at the Havens of Umbar.
3019   Aragorn captures the fleet of the Corsairs at Pelargir.

Dates from The Lord of the Rings, Appendix B, The Tale of Years: The Third Age
Some information from Unfinished Tales, Part 3, Ch 2, Cirion and Eorl and the Friendship of Gondor and Rohan: The Northmen and the Wainriders