Gandalf reads from the Book of Mazarbul


An event in the Battles of the Fellowship at Moria; see that entry for an overview:

The Company... stood silent beside the tomb of Balin....

At length they stirred and... began to search for anything that would give them tidings of Balin's fate, or show what had become of his folk.

There were many recesses cut in the rock of the walls, and in... one there lay the remains of a book. It had been slashed and stabbed and partly burned, and it was so stained with black and other dark marks like old blood that little of it could be read. Gandalf lifted it carefully, but the leaves crackled and broke as he laid it on the slab.... Frodo and Gimli... could see, as he gingerly turned the leaves, that they were written by many different hands, in runes, both of Moria and of Dale, and here and there in Elvish script. 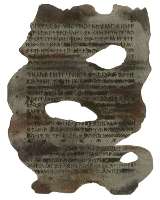 Tolkien's rendering of annals from the damaged Book of Mazarbul.
At last Gandalf looked up. 'It seems to be a record of the fortunes of Balin's folk,' he said. 'I guess that it began with their coming to Dimrill Dale nigh on thirty years ago: the pages seem to have numbers referring to the years after their arrival. The top page is marked one - three, so at least two are missing from the beginning. Listen to this!

'We drove out orcs from the great gate and guard — I think; the next word is blurred and burned; probably room — we slew many in the bright — I think — sun in the dale. Flói was killed by an arrow. He slew the great. Then there is a blur followed by Flói under grass near Mirror mere. The next line or two I cannot read. Then comes We have taken the twentyfirst hall of North end to dwell in. There is I cannot read what. A shaft is mentioned. Then Balin has set up his seat in the Chamber of Mazarbul.'

'The Chamber of Records,' said Gimli. 'I guess that is where we now stand.'

'Well, I can read no more for a long way,' said Gandalf, 'except the word gold, and Durin's Axe and something helm. Then Balin is now lord of Moria. That seems to end a chapter. After some stars another hand begins, and I can see we found truesilver, and later the word wellforged and then something, I have it! mithril; and the last two lines Óin to seek for the upper armouries of Third Deep, something go westwards, a blur, to Hollin gate.' 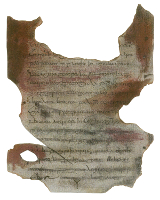 Book of Mazarbul: Elvish script.
Gandalf paused and set a few leaves aside. 'There are several pages of the same sort, rather hastily written and much damaged, he said; 'but I can make little of them in this light. Now there must be a number of leaves missing, because they begin to be numbered five, the fifth year of the colony, I suppose. Let me see! No, they are too cut and stained; I cannot read them. We might do better in the sunlight. Wait! Here is something: a large bold hand using an Elvish script.'

'That would be Ori's hand,' said Gimli, looking over the wizard's arm. 'He could write well and speedily, and often used the Elvish characters.'

'I fear he had ill tidings to record in a fair hand,' said Gandalf. 'The first clear word is sorrow, but the rest of the line is lost, unless it ends in estre. Yes, it must be yestre followed by day being the tenth of novembre Balin lord of Moria fell in Dimrill Dale. He went alone to look in Mirror mere. an orc shot him from behind a stone. we slew the orc, but many more... up from east up the Silverlode. The remainder of the page is so blurred that I can hardly make anything out, but I think I can read we have barred the gates, and then can hold them long if, and then perhaps horrible and suffer. Poor Balin! He seems to have kept the title that he took for less than five years. I wonder what happened afterwards; but there is no time to puzzle out the last few pages. Here is the last page of all.' He paused and sighed. 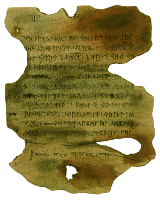 Book of Mazarbul: the last page.
'It is grim reading,' he said. 'I fear their end was cruel. Listen! We cannot get out. We cannot get out. They have taken the Bridge and second hall. Frár and Lóni and Náli fell there. Then there are four lines smeared so that I can only read went 5 days ago. The last lines run the pool is up to the wall at Westgate. The Watcher in the Water took Óin. We cannot get out. The end comes, and then drums, drums in the deep. I wonder what that means. The last thing written is in a trailing scrawl of elf-letters: they are coming.'

The Fellowship of the Ring, LoTR Book 2, Ch 5, The Bridge of Khazad-dûm