Belladonna Baggins was born as Belladonna 1 Took, the oldest of the three daughters of Gerontius Took and Adamanta Chubb; she is the mother of Bilbo Baggins, the grandaunt of Frodo Baggins, and the great-grandaunt of Meriadoc Brandybuck and Peregrin Took:

[The] mother of... Bilbo Baggins... was the fabulous Belladonna Took, one of the three remarkable daughters of the Old Took, head of the hobbits who lived [in Tookland].... It was often said (in other families) that long ago one of the Took ancestors must have taken a fairy wife. That was... absurd, but certainly there was still something not entirely hobbit-like about them, — and once in a while members of the Took-clan would go and have adventures. They discreetly disappeared, and the family hushed it up; but the fact remained that the Tooks were not as respectable as the Bagginses, though they were undoubtedly richer. Not that Belladonna Took ever had any adventures after she became Mrs. Bungo Baggins. Bungo, that was Bilbo's father, built the most luxurious hobbit-hole for her (and partly with her money) that was to be found either under The Hill or over The Hill or across The Water, and there they remained to the end of their days. Still it is probable that Bilbo, her only son, although he looked and behaved exactly like a second edition of his solid and comfortable father, got something a bit queer in his makeup from the Took side, something that only waited for a chance to come out.

The Hobbit, Ch 1, An Unexpected Party

Gandalf the Grey appears to have had a long-term friendship with Gerontius Took and his family, including Belladonna:

'... I do know your name, Mr. Bilbo Baggins. And you do know my name, though you don't remember that I belong to it. I am Gandalf...! To think that I should have lived to be good-morninged by Belladonna Took's son, as if I was selling buttons at the door!'

'Gandalf, Gandalf! Good gracious me! Not the wandering wizard that gave Old Took a pair of magic diamond studs that fastened themselves and never came undone till ordered?.... Not the man that used to make such particularly excellent fireworks! I remember those! Old Took used to have them on Midsummer's Eve. Splendid!.... Not the Gandalf who was responsible for so many quiet lads and lasses going off into the Blue for mad adventures. Anything from climbing trees to visiting Elves — or sailing in ships, sailing to other shores! Bless me, life used to be quite inter— I mean, you used to upset things badly in these parts once upon a time. I beg your pardon, but I had no idea you were still in business.'

'Where else should I be?' said the wizard. 'All the same I am pleased to find you remember something about me.... Indeed for your old grandfather Took's sake, and for the sake of poor Belladonna, I will give you what you asked for.'

'I beg your pardon, I haven't asked for anything!'

The Hobbit, Ch 1, An Unexpected Party

Belladonna served as head of the Took clan after the death of her husband Bungo in SR 1326, until her own death:

In the case of large powerful families (such as the Tooks),... the head was properly the eldest male of what was considered the most direct line of descent.... If the master died first, his place was taken by his wife, and this included (if he had held that position) the titular headship of a large family or clan. This title thus did not descend to the son, or other heir, while she lived.... It could, therefore, happen in various circumstances that a long-lived woman of forceful character remained 'head of the family', until she had full-grown grandchildren....

Bilbo did not succeed, until the death of his Took mother, Belladonna, in 1334, when he was 44.

'And all seemed well with Bilbo. And the years passed. Yes, they passed, and they seemed not to touch him. He showed no signs of age.... But I said to myself: "After all he comes of a long-lived family on his mother's side."'


1 Belladonna is one of the many flower-names used by Tolkien for female hobbits:

It's obvious that Tolkien, like Bilbo, loved flowers, and it seems he wished to portray the spirit of Shire women through that sweet, occasionally thorny, timeless imagery....

The Plants of Middle-earth: Botany and Sub-creation, by Dinah Hazell, Ch 1, Hobbit Names 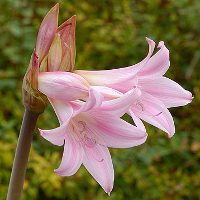 A belladonna lily, Amaryllis belladonna: Tolkien most likely named Bilbo's mother after this flower.
The belladonna lily may be an apt flower for which to name so remarkable a woman, both in meaning, "fair lady," perhaps derived from the use of its juice to make eyes brilliant by dilating the pupils, and appearance. It is not really a lily, but the Amaryllis belladonna; the bulbous plant was imported from the Cape of Good Hope and popular in the mid-nineteenth and early twentieth centuries. Dormant in the winter, it produces leaves in the spring that die back before the silvery pink, somewhat eerily naked blooms appear in summer on stout stalks. 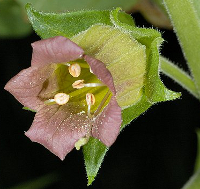 Deadly nightshade, Atropa belladonna: a somewhat less likely source for Belladonna Took's name.
However, the story becomes stranger, as the Amaryllis may not be the first plant that comes to mind when one hears the name belladonna. Rather, it may be the deadly nightshade (Atropa belladonna), a European plant known for centuries and notorious for its poisonous properties. Although used medicinally into modern times, it lives in legend as the killer of children who eat the berries and as the cause of madness. The invasion of Scotland in the eleventh century by Sweyn, the Danish king of England, is said to have been repelled by drugging the invading army with deadly nightshade and killing the soldiers in their sleep. Considering Belladonna Baggins's position and nature (having given up adventures after her marriage), perhaps we should assume that it is the belladonna lily, not the deadly nightshade, that Tolkien had in mind when naming her. Still, it is a curious choice.

The Plants of Middle-earth: Botany and Sub-creation, by Dinah Hazell, Ch 1, Hobbit Names